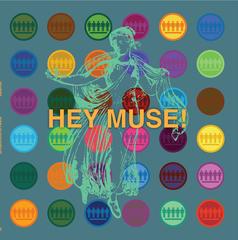 37 years ago Minneapolis, underground new wave legends The Suburbs released their debut In Combo on Twin/Tone Records.  They built up a dedicated cult following but could never really break it big like some of their scene luminaries.  Since their formation they have released multiple singles and 6 LPs.  Their 2013 return with the album Si Sauvage reestablished the band  and, four years later, The Suburbs present their latest recording; Hey Muse!,  an even stronger album than their last. It's packed with expertly written and produced songs that are from another time.  This could have come out in New Wave’s golden era with nobody batting an eye.

The title track is a swirl of synths, reverberating clean guitars, thick rhythmic textures and smoky melody vocals that meld together in a display of groove n’ grandeur throwback that’s even better than some of the bands that got all of the accolades.  Chan Poling’s sweeping synthesizers inject a surplus of foot shuffling dance melodies in conjunction with atmospheric, minimalist guitar textures and Hugo Klaer’s syncopated robo-rhythms.  A stellar chorus melody and harmonized vocals in the verses push this track into a catchy cut above most of the new bands turned onto the new wave sound.  There’s a soulfulness here that’s just lacking in today’s reimagining of the genre.

“Je Sui Strange” has a soaring horn section to compliment  thrusting bass grooves and the plucky guitar figures are somewhere between country, ska and straight rock n’ roll.  It’s an album highlight that possesses a particularly simple, stripped down, hook-laden chorus you won’t soon forget.  The choppy, stuttering synth mash-ups are dance-y one minute and more soul/funk the next in the stomping “Lovers.”  Husky, hearty singing completes this piece with a low-to-the-ground breathy baritone that mingles gracefully with the higher-end back-ups.  Horns and splashes of electric lead guitar round this one out; making sure the sound is full and fat across the song’s every inch.

Punky, funky, synths stacked to the nines and a fun horn presence (played by the keys) mold “Can’t Take You Back” into a track that’s all attack and forward drive that seamlessly transitions into the similarly minded “Unified Forces.”  Not presenting as many hooks as the majority of tracks on the album “Our Love” is a good song that just doesn’t quite ascend to greatness but “Cupid’s” gruff, buzzing guitar lines and wall of synths more than makes up for it.  The somber, pleasantly ebbing “Butterfly” is a sparse jam with ethereal keys, moody vocals and thumping digital percussion; one of the album’s best offerings for sure.  Curtain caller “When We Were Young” ends the album in a fiery explosion of melodic new wave n’ punk combo blasts. When all is said and done Hey Muse! does very much right and very little wrong.  It’s a fine addition to the band’s storied career.

November 12, 2017
OFFICIAL: http://blacknotegraffiti.com/ FACEBOOK: https://www.facebook.com/BlackNoteGraffiti TWITTER: https://twitter.com/blacknotegraffi Written by Raymond Burris, posted by blog admin The second full length release from Ann Arbor’s Black Note Graffiti, Volume 2: Without Nothing I’m You, is an eleven song collection that positions this (then) four piece to rise several more notches in the world of indie rock. The band, furthermore, crackles with the potential to take their act far outside the warm but relatively narrow confines of the indie scene. Rock and its musical progeny may swim upstream commercially in our modern music world, but what that means is that the limited room for viable acts culls the fat off the genre and those who boast marquee status truly deserve it. The band’s talents are considerable – musically, vocally, and lyrically. The growth they’ve exhibited since their 2013 debut is surely the result of the inherent talent they’re dealing with, but it
Post a Comment
Read more